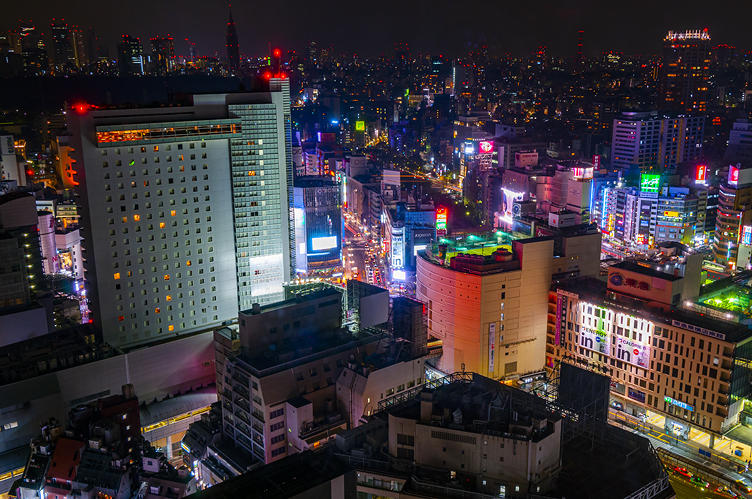 On the train ride back, the scenery slowly transitioning from natural back to artificial, we chatted more about the city, our countries and more. A change at Ōmiya Station 大宮駅 and then on to the hive of Shinjuku Station 新宿駅 where we eventually parted ways, with Yoshida-san 吉田さん confident that I wouldn't get lost.

As I write this, it's recently become possible to tour other sections of the Metropolitan Area Outer Underground Discharge Channel 首都圏外郭放水路, like the turbine room and the top of the first shaft, although proficiency in Japanese is still a requirement. Perhaps I'll go back some day and check it out again, as the language barrier is less of a problem for me now than it was then: unbeknownst to me at the time, a few months later I'd meet the man who would become my husband, who also happens to speak Japanese. A lot has happened in the past few years.

Back to Shibuya 渋谷 and the hotel for a break, then across to Tokyu Hands 東急ハンズ again for another dig around and a bite to eat for lunch. After, on to the Yamanote Line 山手線 and north a couple of stops to explore more of the skyscraper district of Shinjuku 新宿 on foot. A popular place to visit is the Tokyo Metropolitan Government Building 東京都庁舎, due to the impressive views offered by the observation decks on the 45th floors of both towers, 200 metres up. It's also a gem of a building architecturally, with a look of constructive solid geometry. So that's where I went, and it was totally worth it: from the observation level the vastness of the city becomes apparent, filling everything below the horizon, an ocean of concrete dotted by islands of bushy dark green parkland flecked with white sakura 桜.

Back down at street level and into the station again, this time taking the Chūō Line Rapid 中央線快速 to Ochanomizu Station 御茶ノ水駅 and on to Akihabara Station 秋葉原駅, to find the Electric Town game store called Super Potato スーパーポテト. I'd obliviously walked past it previously, but prepared with a map screenshot it was easier to find this time around. If you played a lot of Atari 2600 and NES growing up, this is the place for you. Multiple levels filled to the door frames with everything to give you a dose of nostalgia and the excitement of seeing all those titles you'd read about as a kid but never got the chance to play. It's fantastic! The top level also has a small arcade, but the single open window is inadequate ventilation for the miasma of cigarette smoke, so I didn't stay up there too long.

After the retro fix it was just a few stops to Tokyo Station 東京駅, so despite the long day I ventured over to look around before looping back to Shibuya 渋谷 for a red meat feast at B & Loin, some more photos (including the above), then packed things up and called it a night. In the morning, I checked out and started the journey to Takayama 高山市.