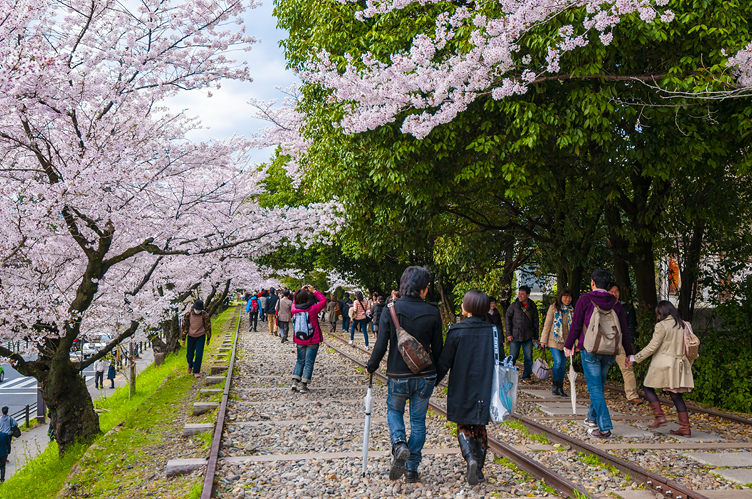 Strolling down the Keage Incline 蹴上インクライン and taking in the splendour of the cherry blossoms, but also the sense of wonder that's with everyone during hanami 花見 and the joy as people gather and reflect on the transient beauty.

Here, several hundred metres down the slope where it begins to near the level of the street below. 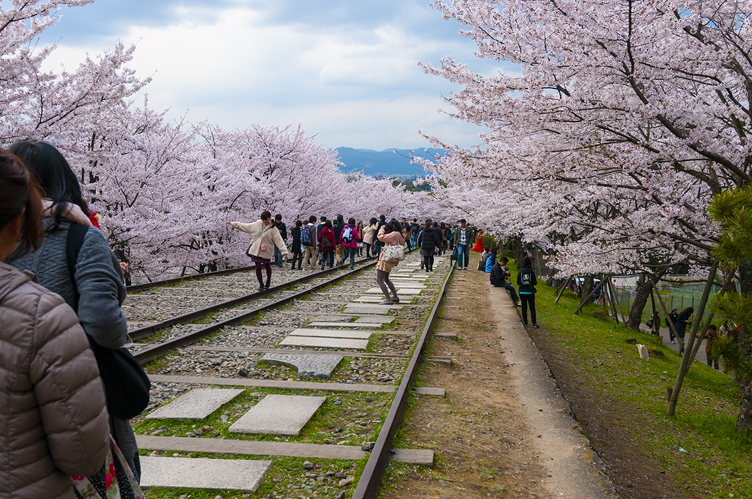 People are drawn to balance on rail tracks. It's a natural impulse, like cats to cardboard boxes. This took me back to being a kid and doing the same on the tracks that used to run the length of the Urangan Pier. 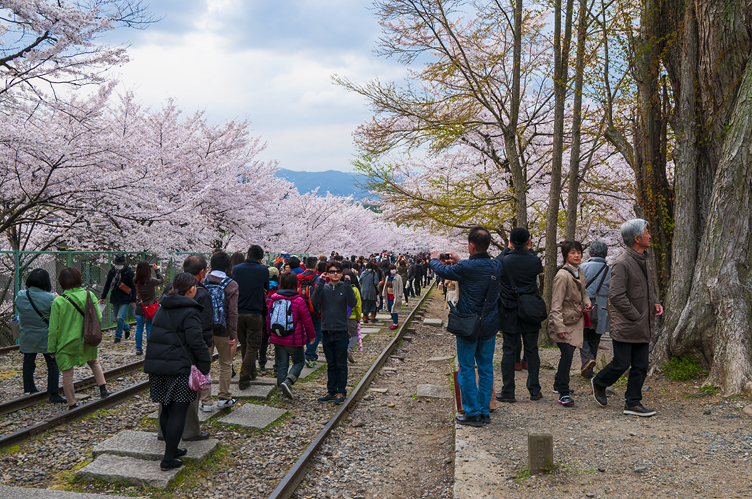 A little further down where the real attraction begins. Weightless above the sides, the flowers gently fluttered in the occasional gust. It's the simple things. 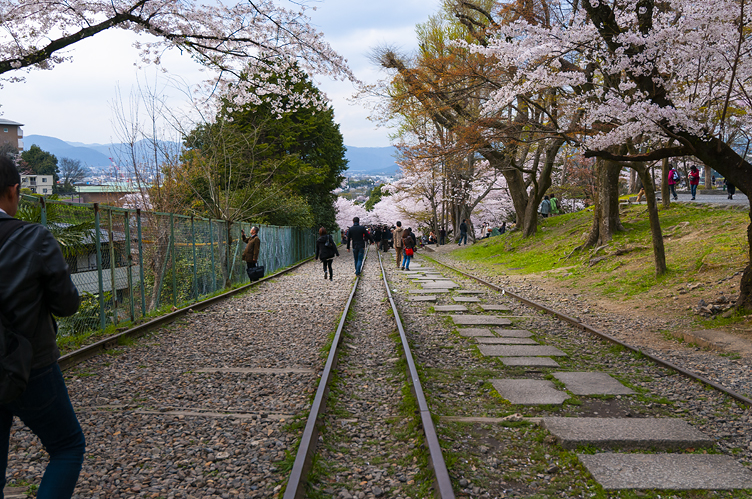 At the top of the Keage Incline 蹴上インクライン and looking down to the masses that were gathering under the trees below.

The Lake Biwa Canal 琵琶湖疏水 served as an important route for the transportation of goods for the city, but the sections of the canal have an elevation difference of 36 metres, so a way to transport boats between them was needed. Frequently moving boats using locks would have been slow, so they devised and constructed a roughly 600 metre long railway lift instead. Boats could simply manoeuvre into a submerged cart without having to unload cargo and then be transported up or down in just 10 to 15 minutes.

The incline lift operated from 1891 through to 1948 when transportation by train had taken over as the preferred choice, but the tracks have been retained and the path is now lined by sakura 桜, making it a popular place to visit. 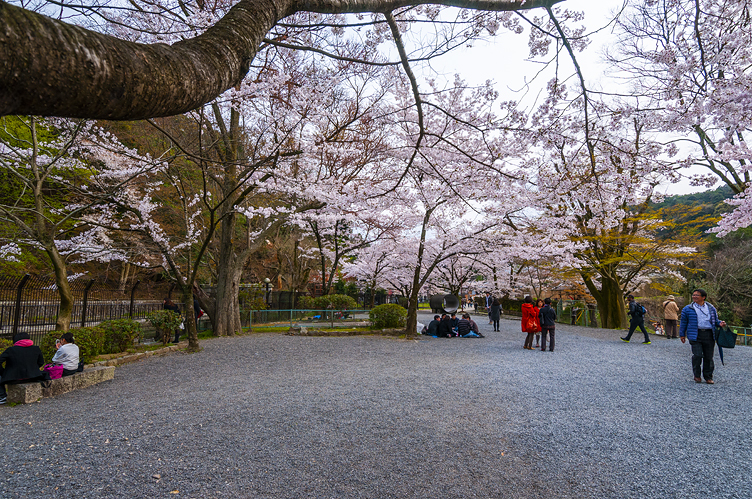 In the park where the blossoms rippled around in the gentle breeze coming up the hill, quiet happy chatter and the sound of crunching gravel under foot. 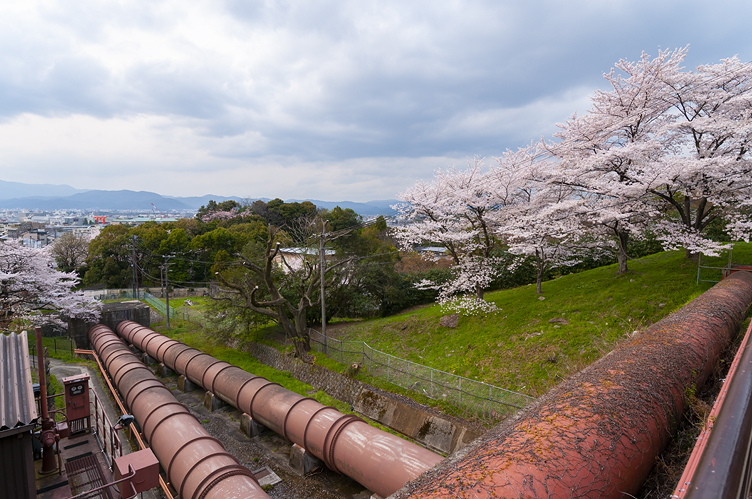 At the end of the sheltered path is a park where the aqueduct joins a network of gates, canals and cisterns. But before that, a large pair of pipes can be seen down the adjacent hill, easily identifiable as hydroelectric water supply channels.

They lead to a hydroelectric power station built in 1890, the Keage Power Station 蹴上発電所, which not only supplied power for the Keage Incline 蹴上インクライン (which was used to transport boats between two sections of the canal), but also for the first electric tram system in Japan.

If you look closely you can see the bright vermilion grand torii 大鳥居 of Heian Jingū 平安神宮 in the distance. 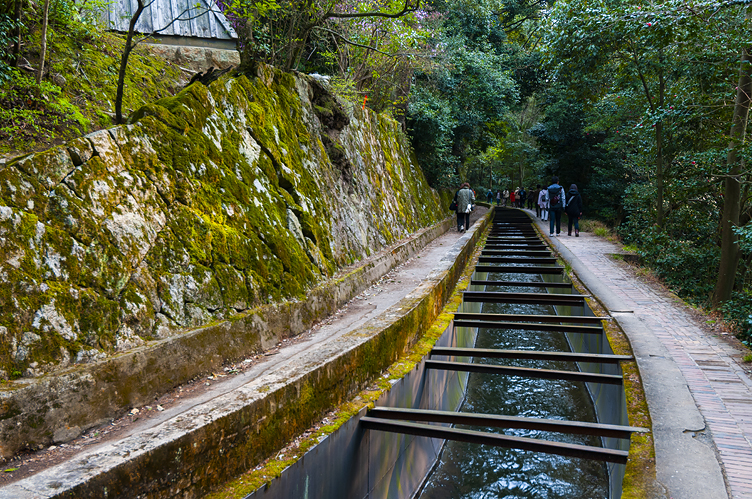 Up top, the water flows into a tunnel in the hillside, while at the other end it's possible to follow steps that lead here, to the aqueduct itself. It seems almost conspicuously unfenced given how well protected the arched section is, and while it's no different to the city's many other canals, they don't give the same impression of being slightly hazardous. Perhaps the more briskly flowing water is what makes the difference.

The path was quiet and relaxing, with its elevated position granting pleasant views through the trees on the right.