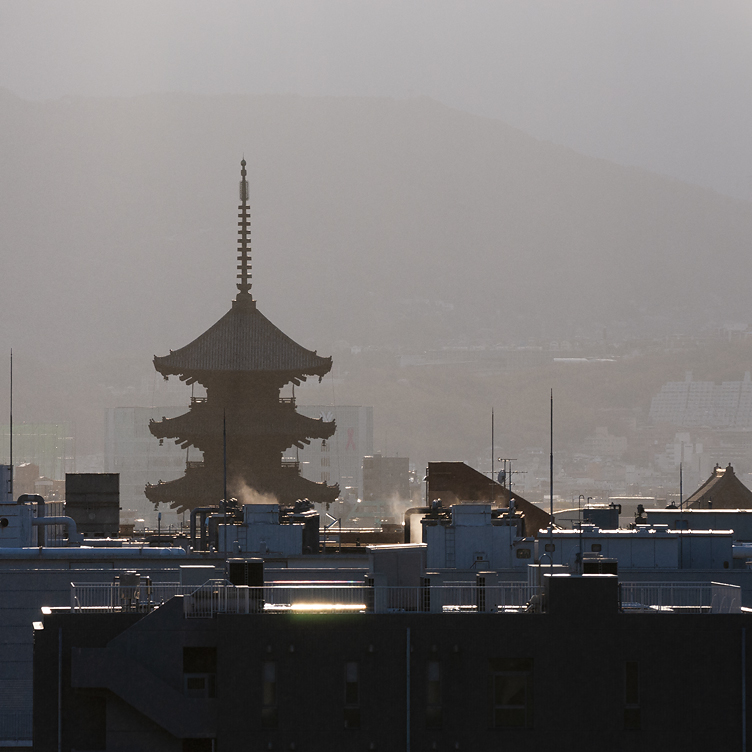 Gliding into the city and disembarking in Kyoto Station 京都駅, then finding bearings in the many levels of the building to exit via the south side and head to the hotel a few blocks away.

The ground was still damp from earlier showers and a strong wind was relentlessly scrubbing through the city's street grid, which made for a chilly suitcase drag. But it didn't take too long to find the hotel and check in, settling in for a little to watch the sakura 桜 blooming updates on TV.

From the balcony, the five storey pagoda 五重塔 of Tō-ji 東寺 was silhouetted in the afternoon light and drizzle, amongst layers of rooftop machinery. It's a view that has proven itself indelible.

Although the sun was setting and the majority of temples and shrines would be closing, I'd read that Fushimi Inari-taisha 伏見稲荷大社, famed for its thousand or so torii 鳥居 gates, was open to the public 24 hours a day. Being situated on a hill there was also supposedly a good view from the top, so I donned a jumper and walked back to the station to catch the next train on the Nara Line 奈良線 to Inari Station 稲荷駅, just two stops and six minutes away. The walk up the mountain is supposed to take anywhere from one-and-a-half to two hours, so I left my DSLR behind figuring there'd be little time for taking photos if I was to make it up to the top and back down to the station before the last train.

The entrance to the shrine is situated just metres from Inari Station 稲荷駅, so it couldn't be easier to find. The giant vermilion torii 鳥居 helps too.

Quite a few people were still outside but the sky was fading fast. Once inside the shrine complex it was clear that most people were taking a few last snaps before making their way out.