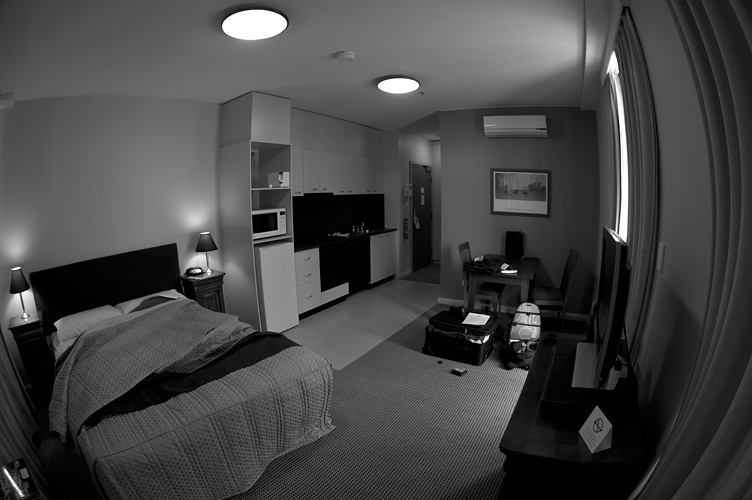 The above, of the room I called home for the two nights I stayed in the CBD, was taken on the foggy Sunday morning that was my last day in Canberra. The studio apartment was far better than expected, especially since all the online reviews I'd read of the place (after I'd placed the reservation) were extremely negative! The experience I had was completely the opposite of what was portrayed by the anonymous former patrons - it was very comfortable and quiet, aside from the occasional disturbances in the back alley that its large balcony overlooked.

In hindsight I wish I'd planned for more time in Canberra: there was so much more to see and do. A lot of my strongest memories aren't of the buildings and the sights though, but of hanging out with friends and the unquantifiable and random things that were part of that. Walking through the city in the cold at night, watching an episode of Naruto while pages of Harry Potter flicked by, visiting a hospital's pharmacy and the waiting room where a news item of unlucky dogs at Le Tour de France was on TV, shopping for a new wallet, the warped plastic bottle top at Pita Pizza and wondering if the car doors had really been locked. These are the things that are valuable.

All good things must come to an end though and it was time to check out.

With a trip to Starbucks to refuel on caffeine, an SMS appeared and stated that my flight would be delayed due to the morning's fog. This instilled a ounce of quiet concern in me as any delays would have resulted in missing my onward flight to Mt Hotham. Being the last flight to Mt Hotham that day it would have meant an overnight stay in Sydney, having to rebook for the following day (at considerable expense, assuming there were even any seats still available) and also losing a day in the snow. Thankfully Lady Luck smiled in my direction and the fog started clearing quickly. The flight was back on schedule and with quick goodbyes I was in the air heading to Sydney.