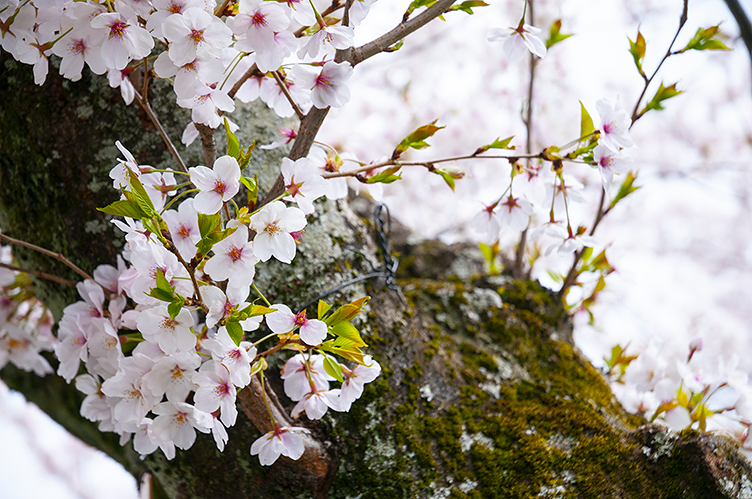 The next day I planned a route to see the cherry blossoms and sights of the eastern side the city, starting with the streets that lead to Ginkaku-ji 銀閣寺, the Temple of the Silver Pavilion.

Because the train network isn't especially extensive and the streets are often busy, getting to anywhere out of the city centre is usually quickest with a train first, followed by a bus. Occasionally a bus is all that's needed, while a taxi is usually one of the slowest options, and only more convenient if you want to avoid walking.

I took the bus to see a bit of the city by day. Arriving in the streets of Sakyō ward 左京区, the trees were in full bloom and a hushed but excited buzz of people snapped photos and admired the flowers. I did, too.

of kitsune and curries 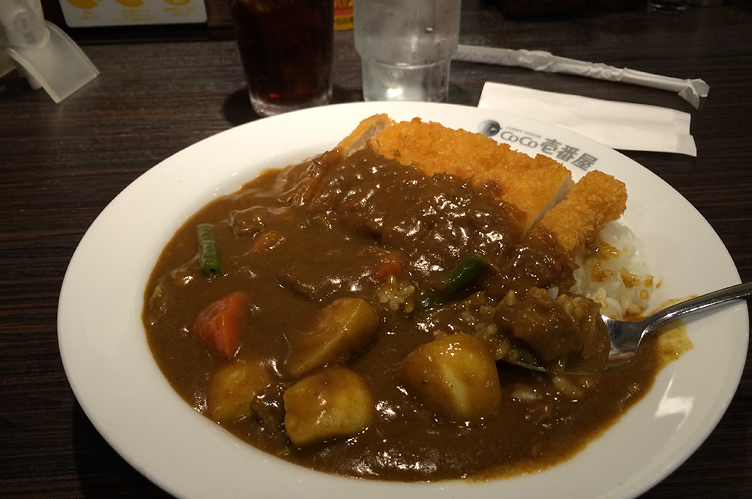 Past the initial shrine buildings and up the first set of stone steps to the start of the torii 鳥居 shrouded path. Inside, people were gathered in a few quiet groups, taking and comparing photos, stepping out of the way to let others get a good shot as the remaining light left the sky. A few minutes later and further up through the tunnel it was suddenly much darker, the sun having set and the forest providing extra dampening, and the occasional lantern along the way reflected in a line of highlights off the vermilion columns.

As the path split into two parallel passages a few more people were making their way through, but at the end where the sides rejoined at the junction formed by the courtyard of the Okusha Hohāi-sho 奥社奉拝所 (a prayer building), the onward path to the left was empty.

I took a few snaps with my phone, but phone cameras back then weren't good in low light, so I moved on. It didn't take long before the gradient increased substantially. The pattern of lengths of pavement interrupted by occasional rises became a rarity, replaced instead by an almost continuous flight of weaving stairs, all enclosed in orange-red gates. Moving quickly up the hundreds of steps made for quite a workout.

The lighting became sporadic and the path barely visible, so I used the dim flash of my iPhone to light the way. All around, darkness, slow flows of wind rising up sometimes and rustling the trees. Occasionally, somewhere off the track, what sounded like wildlife scampering by – a monkey or boar, most likely. And once for a time the distant sounds of a crowd at a baseball game in the suburbs below.

After countless stairs and gates and past a few small buildings with vending machines glowing outside, a view opened above the trees and the shimmering lights of the city spread out like a lake of gold that filled the valley to the black mountains on the horizon.

A couple of young local guys chatted quietly under a light near where the path forks to form a loop that leads to the top, and I walked on and up, checking out the shrines along the way. Everywhere at these, adornments of little torii 鳥居 and statues of Kitsune 狐 (foxes) packed tightly together. I caught my breath for a while at the top and enjoyed the peace and the cool air. Looked around the little circuits of the shrines, square paths walled in tightly by stone blocks and stone fences.

Getting hungry and unsure of when the last train would be, I started back down, faster, skipping stairs that were visible to make up time while trying to avoid a trip in the dark. Along the way I realised I was on an alternative path that would lead to another side of the hill, so hastily I backtracked and found the right path again.

About half an hour later I was down at the base and sure, then, that I would do this again. Walking through there at night with the repetition of steps and gates is a meditative experience, even if you don't intend for it to be.

At the station, electronic bird sounds echoed down the platform, and not long later I was on a train and back at Kyoto Station 東京駅 where the restaurants had shut for the night. Walking back in the direction of the hotel I came upon a Curry House CoCo Ichibanya カレーハウスCoCo壱番屋 on a corner and decided to give it a try. It was a great choice.

Because I didn't take any proper photos that night, enjoy this phone pic of Japanese curry, which is super delicious (and now a favourite meal of mine).