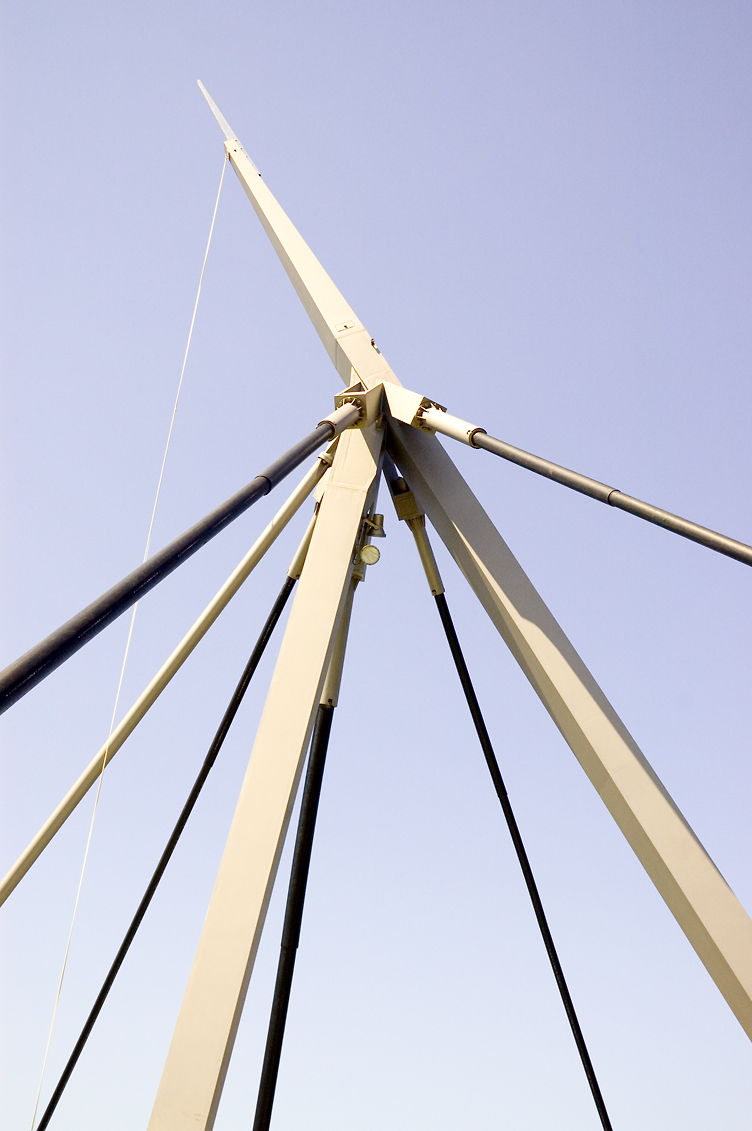 The pavilion spire of the asymmetric Goodwill Bridge. 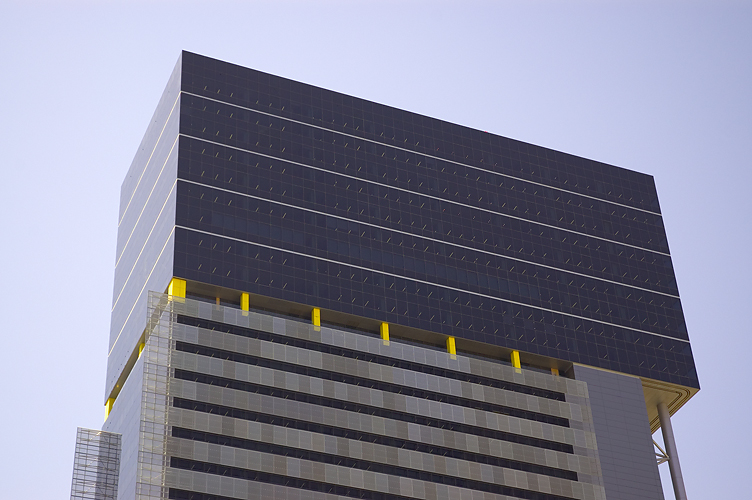 I was in Brisbane for part of last week and while there I had a few spare hours to walk around the city and take some photos. Above is the top of the new Brisbane Square building, monolithic and standing immovably at the north end of the Victoria Bridge, imposing and with minimalistic and siren-like appeal. 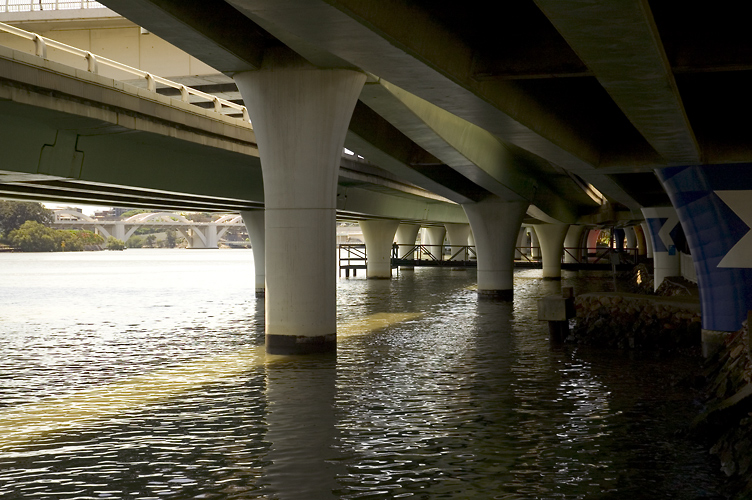 Under the Riverside Expressway near North Quay. Strangely, some of my earliest memories of Brisbane are of these pylons.

some kind of turbulence...

Early Tuesday morning and with only a few hours of sleep (my body clock is running on Helsinki time), I flew to Brisbane for the 8-month-postponed U2 concert. Just to add to the chaos, Tuesday was coincidentally the day of The Melbourne Cup.

The flights there and back were dislocated when the airline recently withdrew its services from this area. Sunshine Express is now a charter service only, so the existing reservations were taken over by Qantas. As you can imagine the transfer of reservations resulted in some "fun", with earlier flights and incorrect times and e-ticket numbers being issued. It's lucky that I double-checked the times provided via e-mail because otherwise I would have arrived at the airport to an empty gate.

Because the new flights were earlier than what had been originally booked there was time to kill after I arrived in Brisbane. There was ample time to get something to eat, walk around the city, do some shopping and then see the movie An Inconvenient Truth (which I'd highly recommend). In the evening my cousin, brother and I went out for dinner at a cool little Asian restaurant before attempting to make it to the city where shuttle services were running to ANZ Stadium, the venue for the concert. At this point there was panic, because we were informed the shuttles were going to stop at 7:30 PM. It was 7:14 PM, and we'd missed the train. A bit of frantic running and flailing and we made it on the last shuttle.

With literally 50 000 people trying to get into (and later, out of) the stadium, to say there were lines would be a gross understatement. It was worth it though! The concert really exceeded my expectations and U2 sound just as polished in the flesh as they do in the studio, something which can't be said for a lot of rock bands.

The other people we were supposed to be meeting were impossible to locate even once we were inside; there were just too many people and the mobile phone network gave up under the weight of an undoubtedly enormous number of simultaneous calls.

Afterwards it took about two hours to get out of the place and home. Someone could make good money selling tees stating "I Survived the U2 Concert Shuttle Buses" - you had to be there to be able to appreciate the insanity of it all :)

The next day I went back into the city just in time for a bank of huge thunderstorms to blitz the coast. After another jumble of flight reservations, being shuffled between service desks and having my scrambled reservation reissued, I was on my way back. Due to the huge storms the flight was entertaining: constant turbulence, beautiful views of lightning from above and in the clouds, some creative flying by the pilots and a generally anxious look chiselled into the face of the woman sitting next to me. A westerly diversion to avoid some of the storm cells increased the flight time, then after landing there was a major blackout with the city being plunged into darkness.

It was a long and enjoyable two days :) 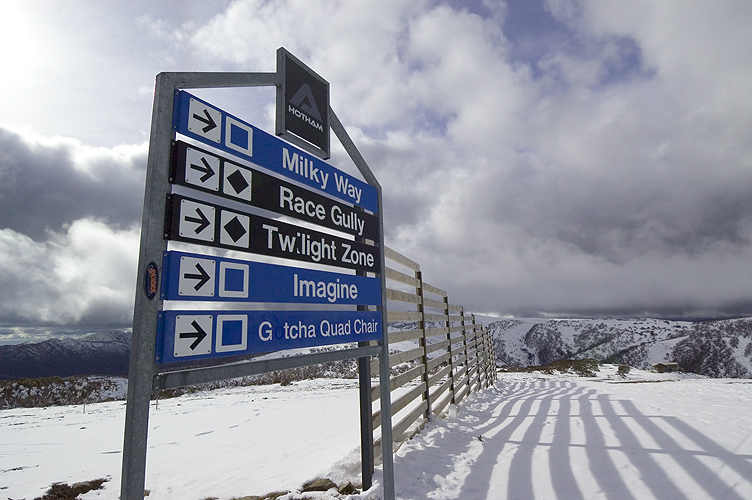 A few more days of boarding and relaxing at the snow and the holiday was coming to an end. The last day was spent killing time, checking out the parts of the resort we hadn't visited previously and browsing in the village shops. For some crazy reason we decided to check out the top of the Heavenly Valley chairlift, which at the time was closed due to low snow cover on the runs it services. We also didn't have snow gear on and despite my head being covered by The World's Most Expensive Beanie it was undeniably freezing. Still fun, though :) 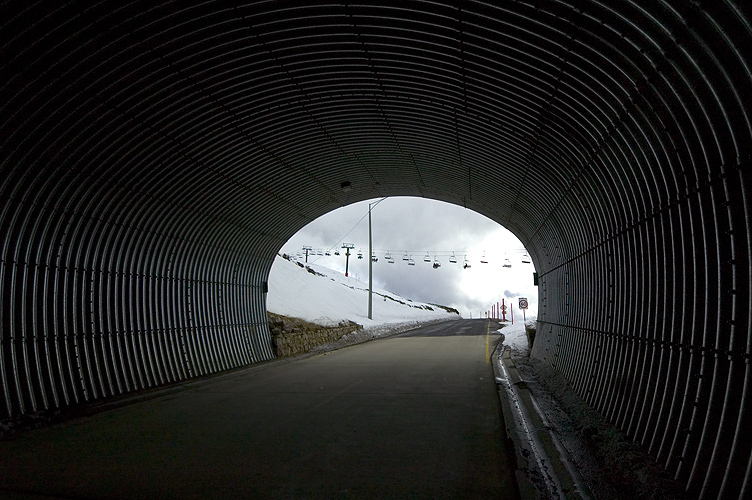 We left by bus late in the afternoon back to Melbourne, a long trip, but one that seems to go quickly at night. We arrived at Melbourne Airport around 10:30 PM and made our way to a minimalist semi-capsule-hotel nearby, checking in for a brief sleep before dragging luggage back to the airport for our morning departures. We needn't have made it to the airport so early because fog had delayed or cancelled most of the outbound and inbound flights. My original flight (with a connection) departing at 8:15 AM was cancelled and I was moved to a later flight. Similarly my friends' flight was also delayed, however by the time their flight eventually departed I was still stuck in Melbourne, waiting for my new flight to board. It was further delayed and despite assurances from the staff that my connecting flight in Sydney would be held to ensure the connection was made, upon arrival there I was informed that the aircraft was in fact already taxiing.

Why they couldn't wait two minutes is beyond me, but that's the way things go. The airline's plan was to put the 13 people who were supposed to be on the connecting flight on a later flight to Brisbane, then bus them the rest of the way (an extra 4 hour bus trip)! After much venting and complaining some people accepted the offer. I accepted the alternative flight to Brisbane but there was no way I was spending another four hours on a bus, so I immediately left the gate and ran through the airport to get to the ticket office to try to find alternative local airline flights from Brisbane to home.

Luckily I was able to reserve a seat on Sunshine Express (which incidentally no longer flies here, but that's a story for next week), although it was cutting it close: the Sunshine Express flight left only 15 minutes after the flight to Brisbane was scheduled to arrive. Given the delays so far it seemed like a long shot.

So with a possible flight secured and after some more waiting around at Sydney airport - and by this time it was midday when I was originally supposed to be home - it was time to board another flight bound for Brisbane. Before leaving I somehow managed to end up in the middle of an Australian Cricket Team procession, walking alongside some of Australia's greatest cricket players, flanked by security personnel. How bizarre!

A short flight from hell, surrounded by parents with screaming kids, I was in Brisbane and running around another airport again. To cut a very long story short, there was a mix-up with the luggage, but it all worked out OK in the end. Finally I arrived back home late that afternoon. Four airports in one day is just too much.

This concludes my catch up posts for New Zealand and Mt Hotham. From now on it will be as-it-happens again! :) 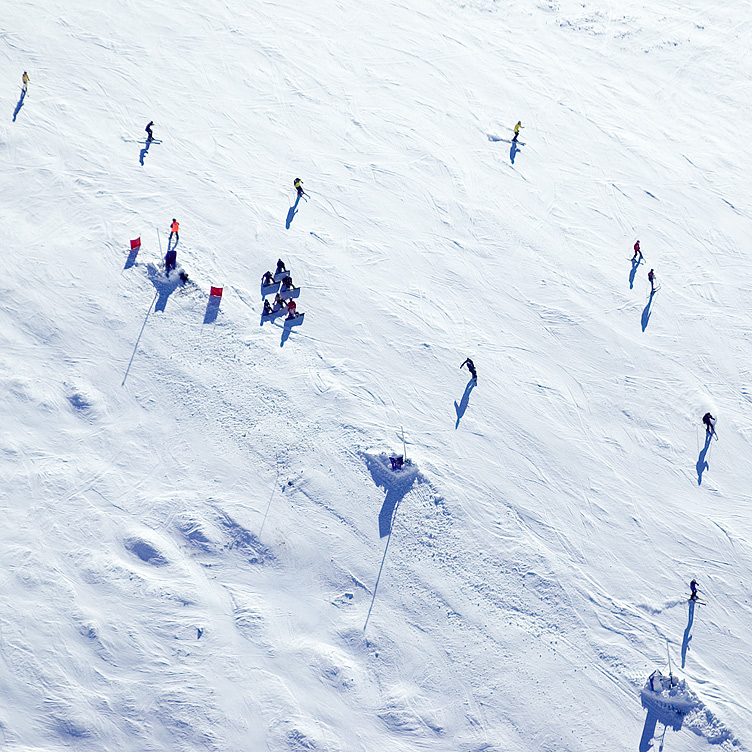 Sometimes you can be lucky: a single bluebird day. Before long the scream of a Rolls-Royce jet engine enveloped everything and I was strapping in, headset on, ready for take-off.

Every part of the experience was great. The views of Mt Feathertop, Mt McKay, the snowy plains and flyovers of the resorts were unforgettable; helicopters give you a view that you just can't get any other way. There's so much that can be said about the day but I'll keep it short and sweet: the snow was good, I met some really nice people and I had a fantastic time. You can't ask for more than that :) 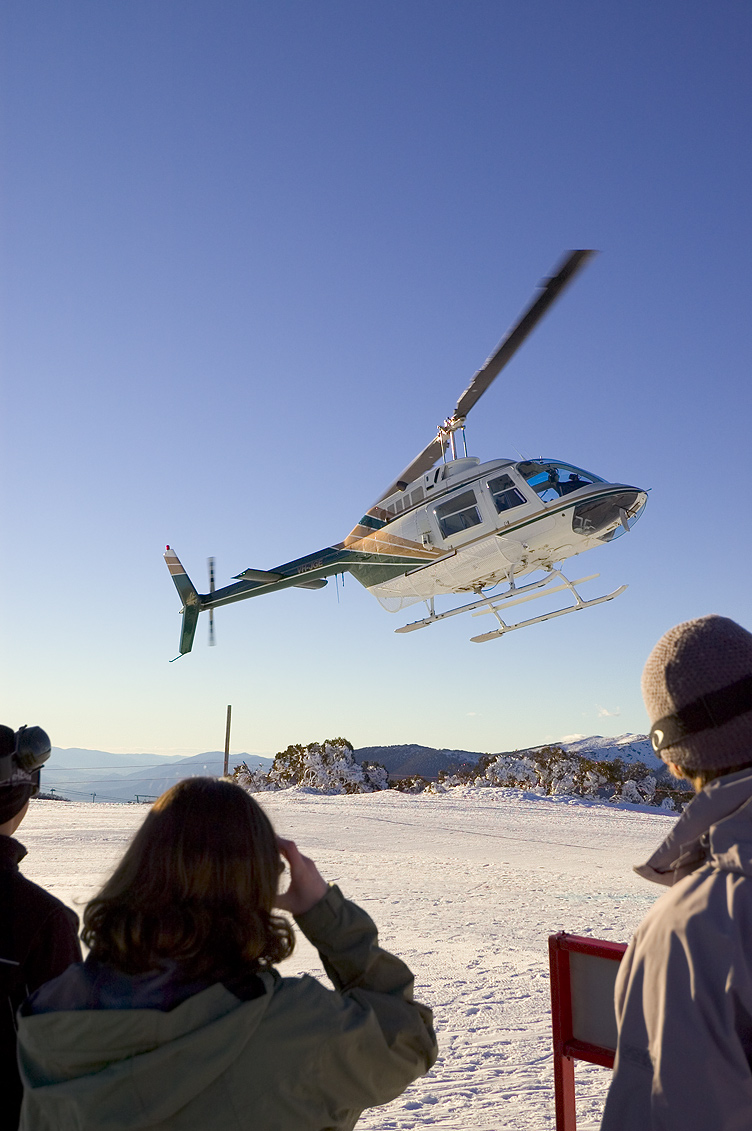 After a long day we watched from the "Departure Lounge" as our ride arrived. Below is the view just after take-off, banking away with a view of the Rocky Valley Lake and the some of the south-facing runs. 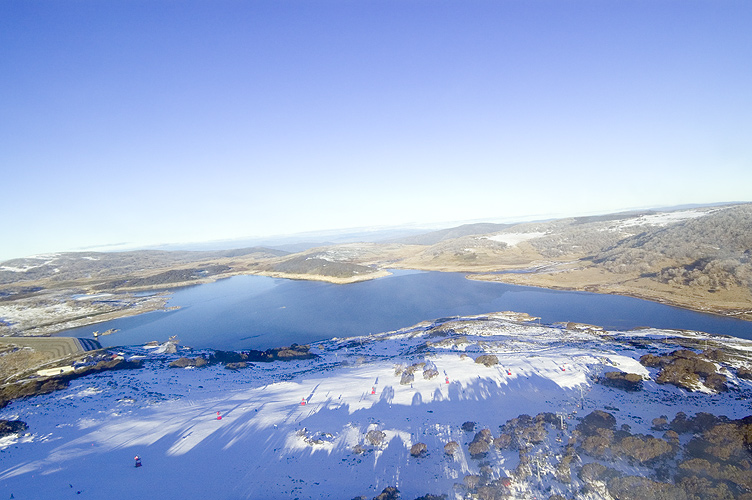 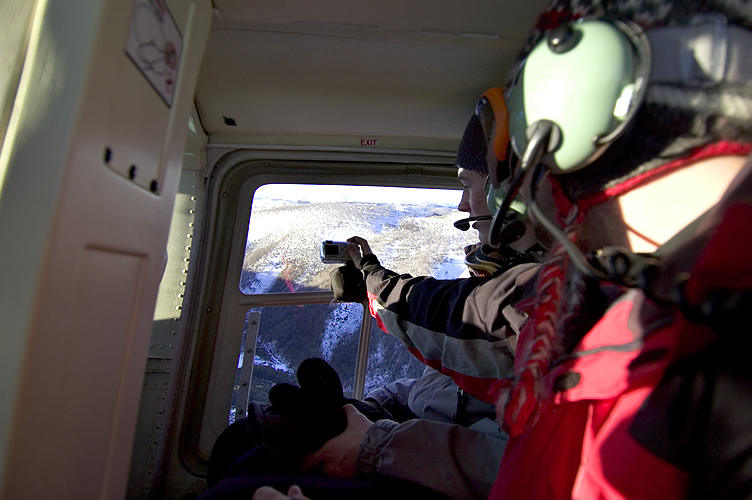