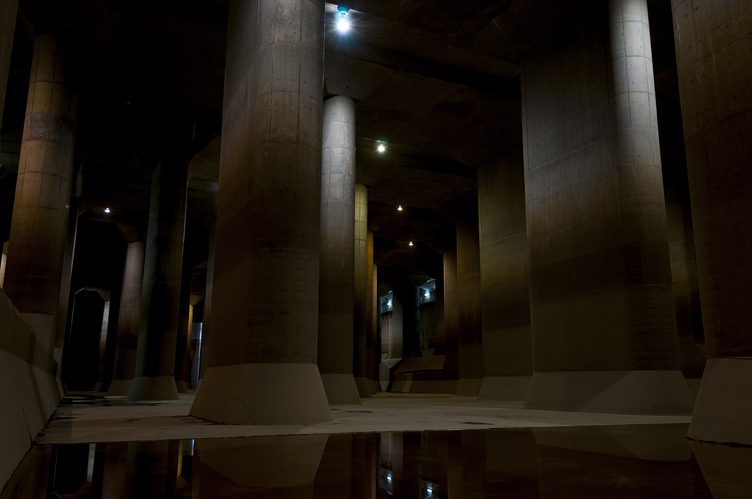 At the far end of the regulating tank are four giant impellers, the largest of their kind in Japan, each powered (via an impressively large gear reducer) by a modified version of an aircraft gas turbine. At full output, even with all of the silencing systems, it must sound unsettling.

The massive drainage shafts take in water via overflow levees from the No. 18 Water Channel 第18号水路 (shaft two), Naka River 中川 and Kuramatsu River 倉松川 (shaft three), Koumatsu River 幸松川 (shaft four) and Otoshifurutone River 大落古利根川 (shaft five), which then flows to the first shaft and into the tank where the pumps regulate the water flow to keep the level within a safe operational range. It's expelled via six subway tube-sized sluiceways into the Edo River 江戸川, making its way into Tokyo Bay 東京湾 and keeping it safely out of the Naka River 中川 and Ayase River 綾瀬川 basin.

The system has proved its effectiveness, consistently saving huge areas from inundation during even the most extreme rain events.

When it isn't going to be active, the tank is cleared of silt and debris using earthmoving equipment lowered through the first shaft. It's an amazing piece of engineering and an impressive experience in person.