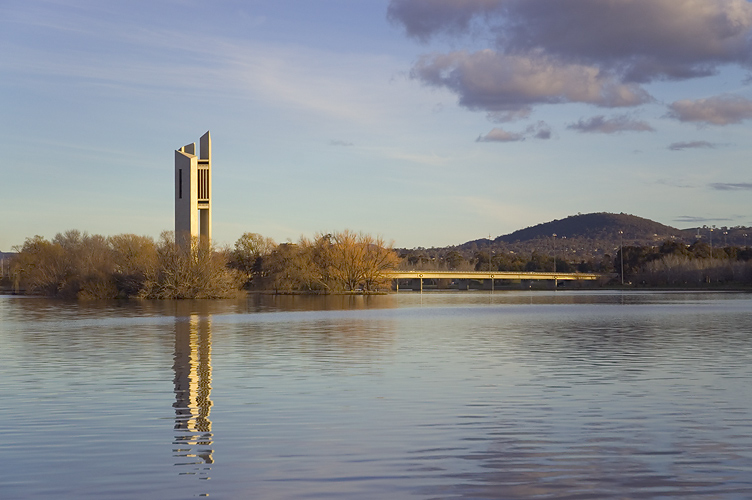 A great way to finish the day, a relaxing walk through the parklands along the shore of Lake Burley Griffin, or rather the part of it intersected by the Parliamentary Triangle. There are large parks and gardens everywhere in Canberra, giving it a spacious and calm atmosphere. This is especially the case, I think, in the afternoon's falling sun and temperature. Above, the National Carillon situated on Aspen Island and, with the surrounding trees, looking like a still life shuttle launch.

This particular carillon has 55 bells and performances are held on certain days, although I'm sure I heard part of the Westminster Quarters during my stay. 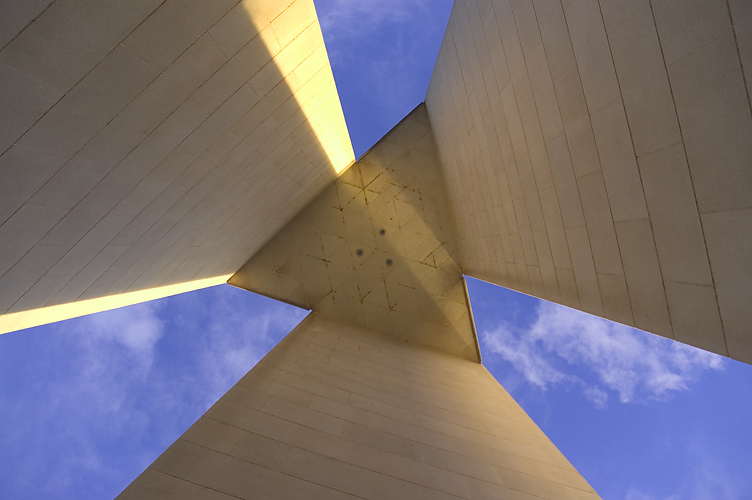 With a height of 50 metres it's a substantial structure to stand under. 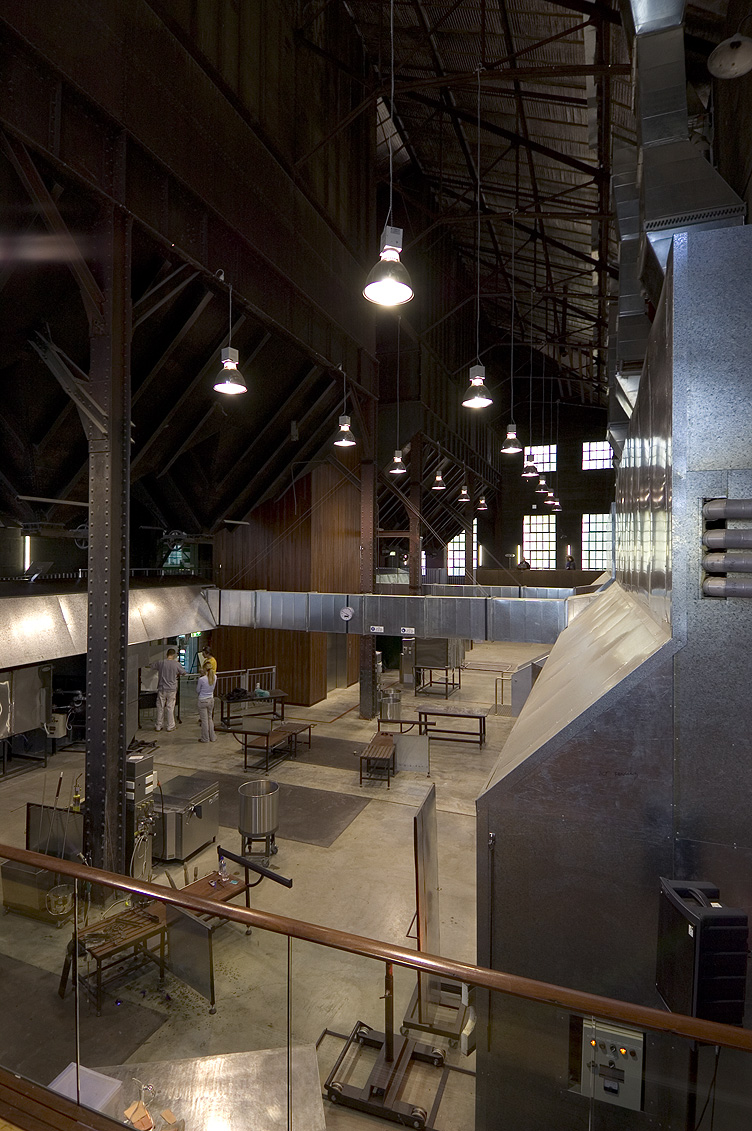 After spending a bit more time than expected (though well worth it) at the War Memorial we took a squiz at the recently-opened Canberra Glassworks. Although it seemed to be nearing closing time they had one demonstration going that was quite fascinating. They really make it look so easy... 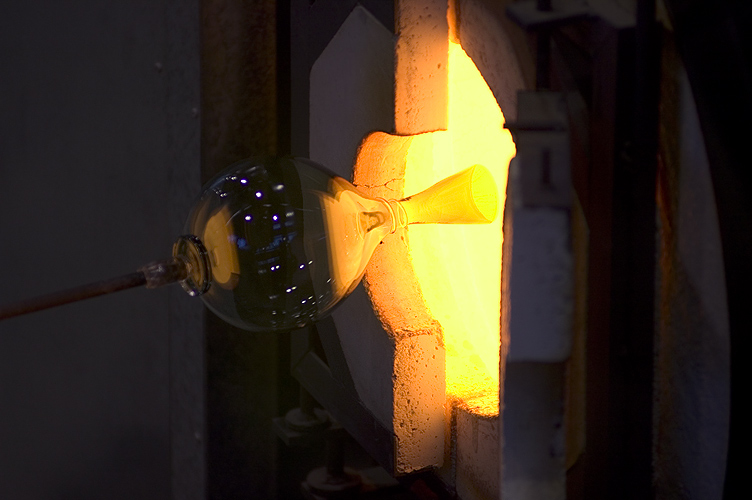 There's one term I'm not going to use here, because I don't want the erroneous Google search hits... heh.

Housed in what was the Kingston Power Station, a coal power station built in 1915, the refurbishment has kept the charm (and the giant coal hoppers) of the original structure. I was a little disappointed to see that the chimney, present in old photos of the exterior, had been removed. Perhaps that happened long ago, though.

A gallery and café also reside in the new facility, both of which provide a home for some very heavy and expensive-looking hunks of glass. 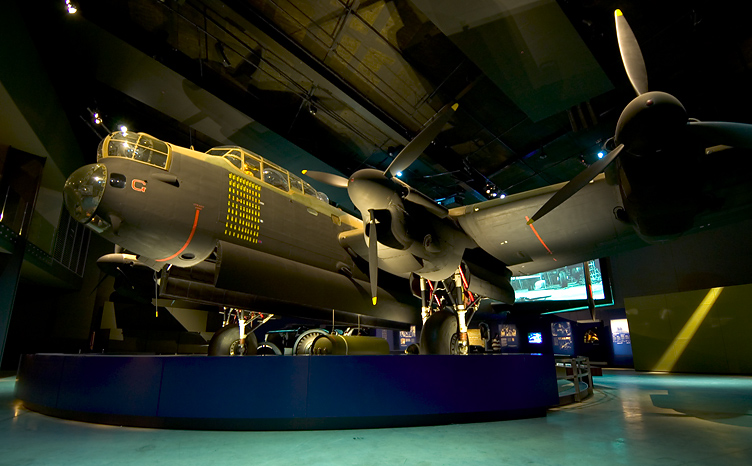 Above, somewhat the centrepiece of ANZAC Hall and part of a "reenactment" display, is AR-G of the No. 460 Squadron RAAF. Now restored and preserved, it flew 90 combat missions during World War II with all crew returning alive. Below and behind it I was surprised to see a massive plaque from a German dam attacked in "Operation Chastise" on May 17th, 1943 (the operation is well-known for the "bouncing bombs" used to target the dam walls). 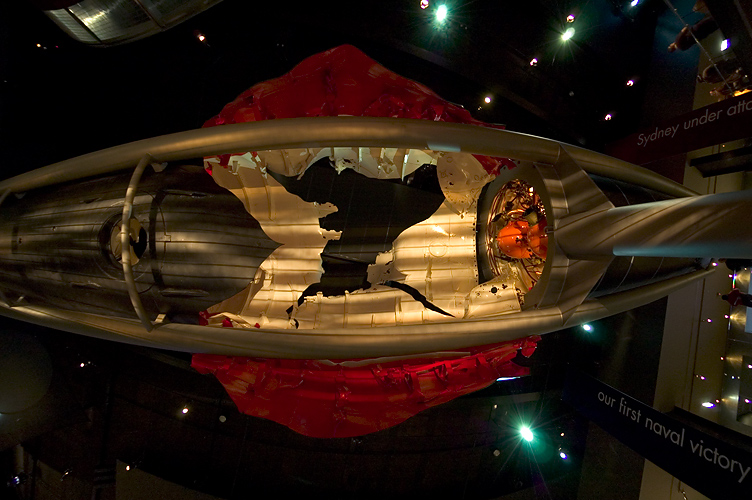 And this is the bullet-time-frozen explode of a Japanese midget submarine, from below, while this is the same hardware from the side: 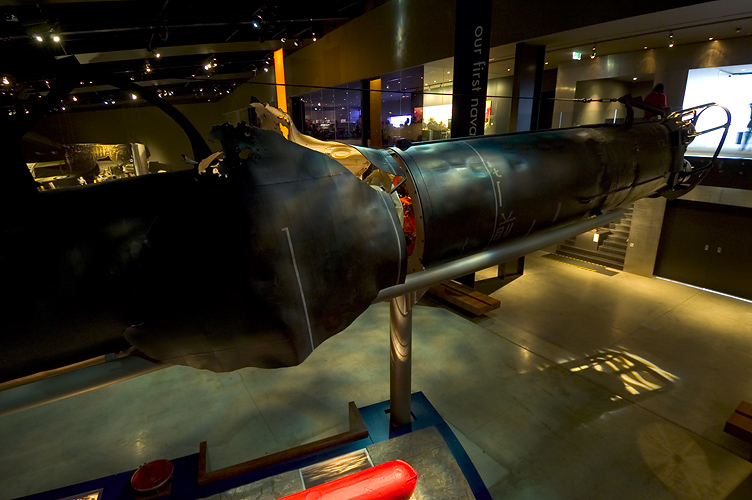 This is assembled from two of the three midget submarines that snuck into, and attacked ships in, Sydney Harbour. The third had disappeared, its fate unknown for over 60 years until it was discovered on the bottom of the ocean by amateur divers last year. 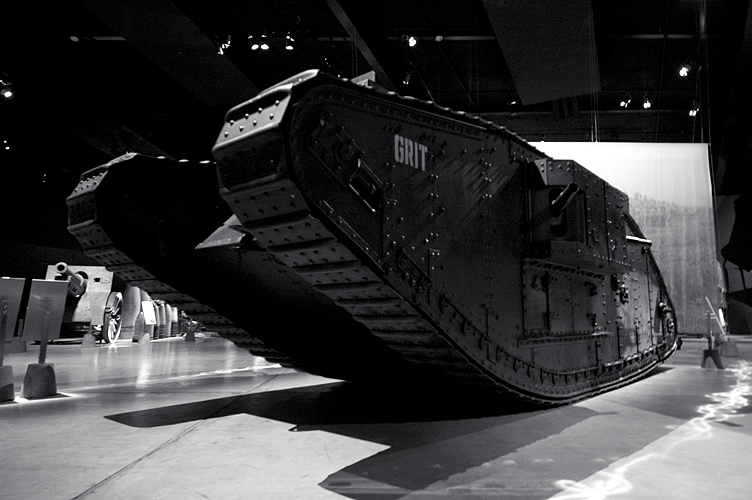 As mentioned, the War Memorial has an impressive collection. From tiny personal relics to massive examples of pre-computer engineering skill, it gives you a real look into what things were actually like. I probably learnt more about World War I and II in those few hours than I ever learnt at school - certainly a more memorable exposé.

While I found that the smaller exhibits had more impact for me than the larger exhibits like the tank above, I've always had an affinity for the utilitarian aesthetics of war machines. There is a distinct stylistic consistency present despite each object being unique in operation, design and purpose, which is fascinating to me. Maybe it's the result of a specific level of technological development, or perhaps just a mirror of design values of the time. 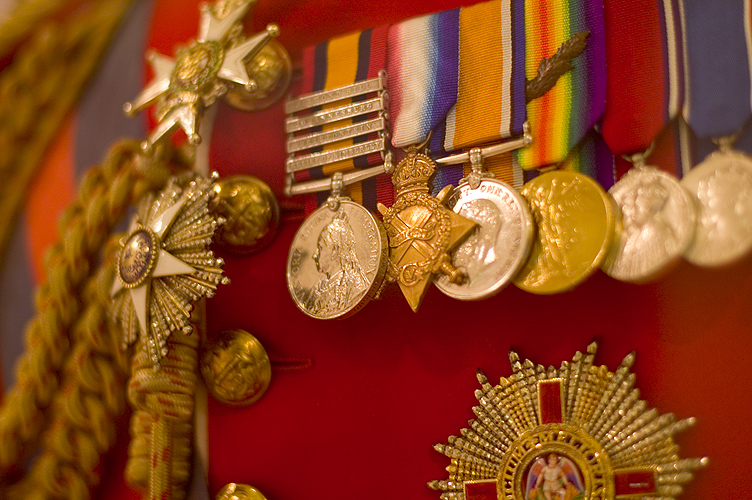 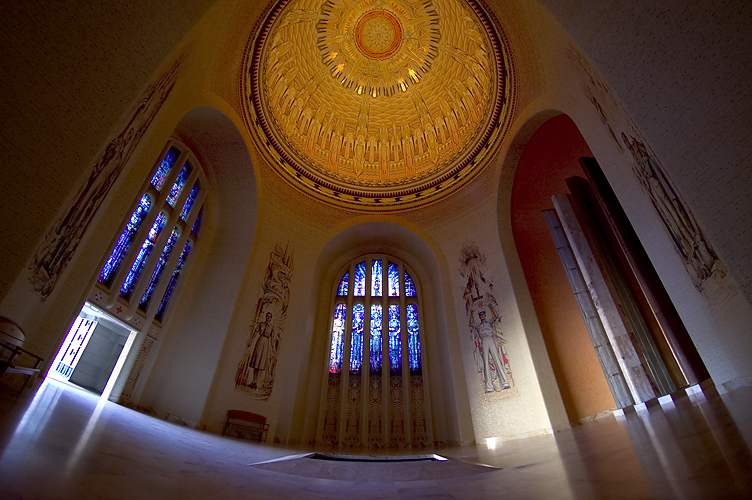 At the northern end of the War Memorial is the Hall of Memory, the cavernous dome-capped Tomb of the Unknown Soldier. Here, set into the centre of the floor, the resting place and memorial for an unidentified soldier who died in The First World War, a symbol of all Australians who have died in war.

The building is an architectural marvel and this photo doesn't represent it well; the interior detail is staggering, with the walls surfaced in intricate mosaic tile illustration and the stained glass windows of equal artisanship. The dome is high, vast and beautifully decorated, with a single tiny portal to the sky at its zenith. The imposing blade-like columns opposite the entrance abstractly represent air, earth, water and fire.

A droning and unusually lengthy echo effect results from the smallest of sounds due to the hard surfaces and spacial design of the chamber.

a sky ceiling, a water floor... 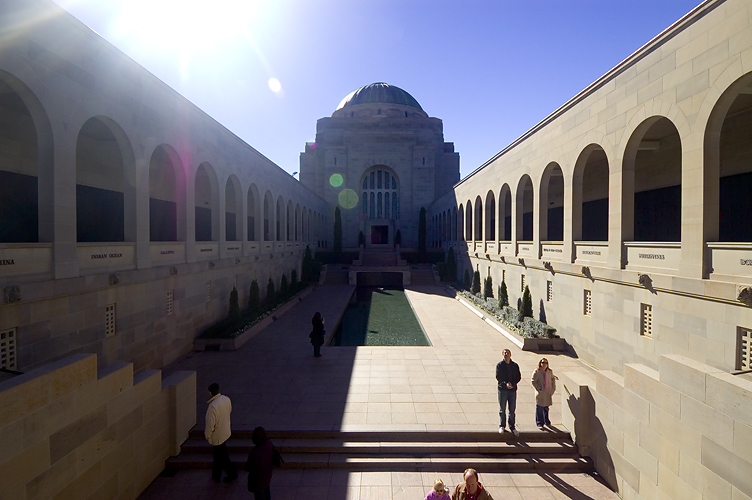 The next day we visited the Australian War Memorial. There is so much to see that you could spend days and barely scratch the surface. The three hours I was there, which was spent skimming the exhibits, felt like an hour and a half at most. Regardless of your background or your interests, it's impossible not to be drawn into the stories and the faces in the photographs. If you're visiting Canberra it's an essential place to experience. 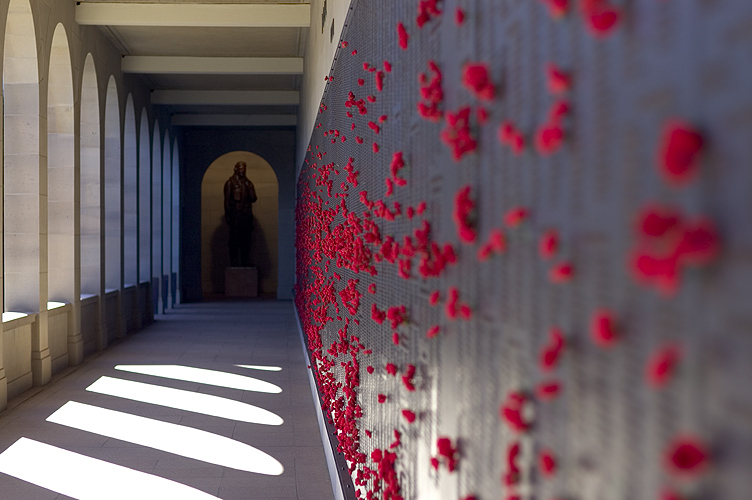 Around the outside of the main courtyard are open hallways presenting the Roll of Honour, the commemoratory record of Australians who have died at war. The large bronze panels list the names and units of the fallen. As seen above, poppies are often placed next to the names of relatives, in the gaps between panels, as a mark of remembrance.

The number of names is a potent reminder of the effects of war. 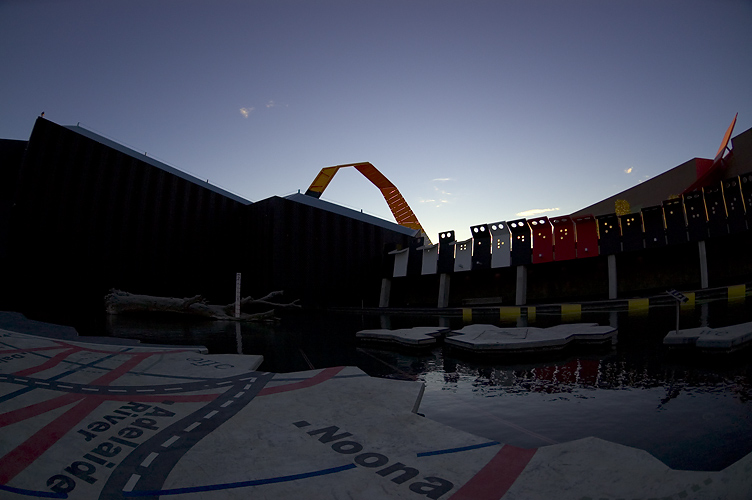 Another view of the National Museum in the afternoon light. The building is a giant work of art and has so many scales of detail that days could be spent deciphering it.

I should mention at this point that Canberra isn't exactly a warm place in winter. From what I can remember, every night I was there experienced below zero temperatures and the days didn't peak far into the double digits. Luckily there was always good food to warm things up again, most of which I hadn't tried before (from Devine Pita to Wagamama, Nando's to Zen Yai, plus a few cafés along the way - everything delicious and in great company!). 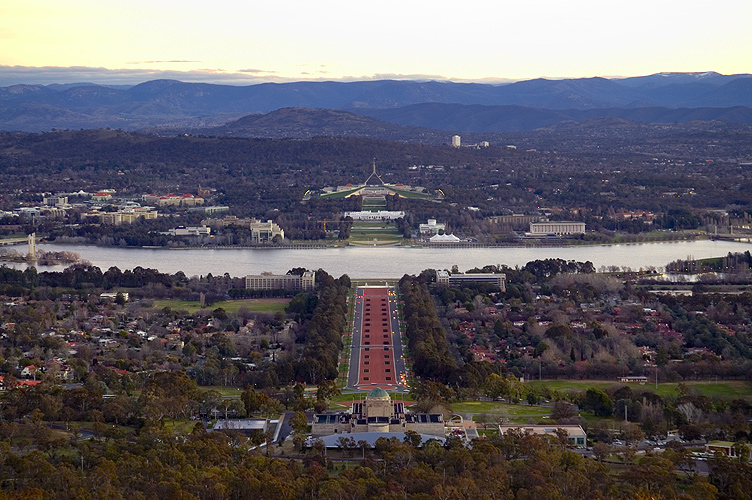 Remember the clichés I talked about? If there ever was an over-photographed Canberra vista, this is it. In the evening from Mt Ainslie, where the sun was down, the wind was up and thus it was ridiculously cold even with the supreme protecting power of hoodies, the overlook featured great views of the Australian War Memorial, ANZAC Parade, Lake Burley Griffin and the Old and New Parliament Houses. The symmetry is striking when the complete Parliamentary Triangle of the CDB, the Parliament and Russell Hill is in view. Once thoroughly frozen, we left for a warmer place.

photographer (not a terrorist)... 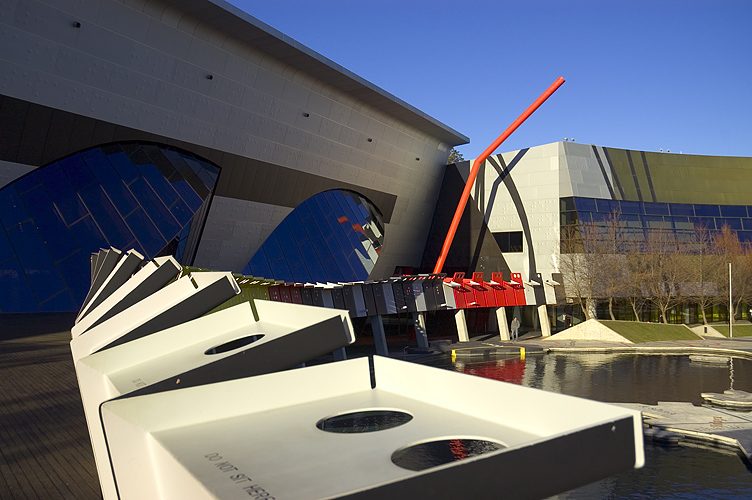 I forgot to mention that while at Parliament House I was briefly approached by security while taking photos of the central atrium (which is directly below the glass pyramid visible in the previous post). The exchange lasted only moments before the guard realised he had his wires crossed, but it goes to show how sensitive people can be these days about photography in public spaces.

For comedic effect, pretend I used the phrase "post nine eleven world" somewhere in the preceding sentence. The photo didn't even turn out that great.

Speaking of which, I found it difficult to take photos of any well-known area or building in Canberra without it being a cliché or at least reminiscent of a tourism brochure. Partly this is because everything in Canberra is iconic, but I also felt the symmetry present everywhere suggests strongly the framing that a shot should have. Being a designed city it simply looks best from the places it was designed to look best from. Ironically this makes it a bad subject for photography, a bit like taking a photo of a painting: the photo is a redundant exercise that will never be as good as enjoying the original work of art in the flesh. Sometimes the occasional cliché is OK though, and I'll post just such a shot in the next entry.

The above view is of the National Museum, which should be visited if only for its architecture and "big spiral thing". 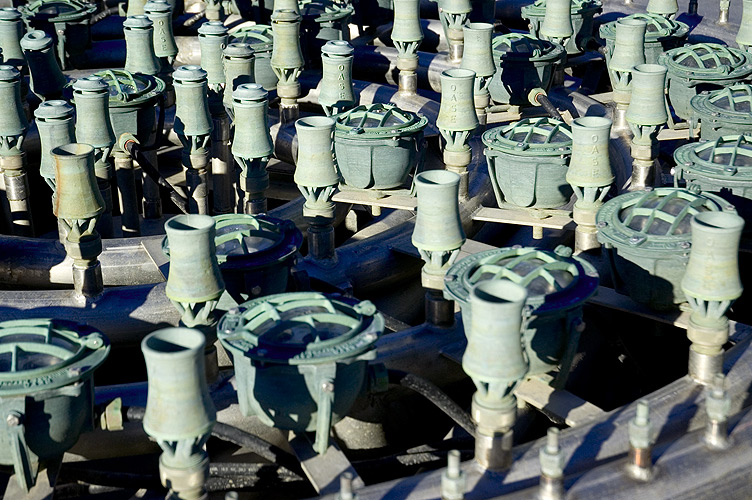 Given that water restrictions are in effect, most of the large fountains and water features had been drained and turned off. Above, the nozzles and lights of one of several silent fountains in front of Old Parliament House. This is a bit of a half-hearted gesture when the nearby Captain Cook water jet is seen throwing tons of water into the air ;) 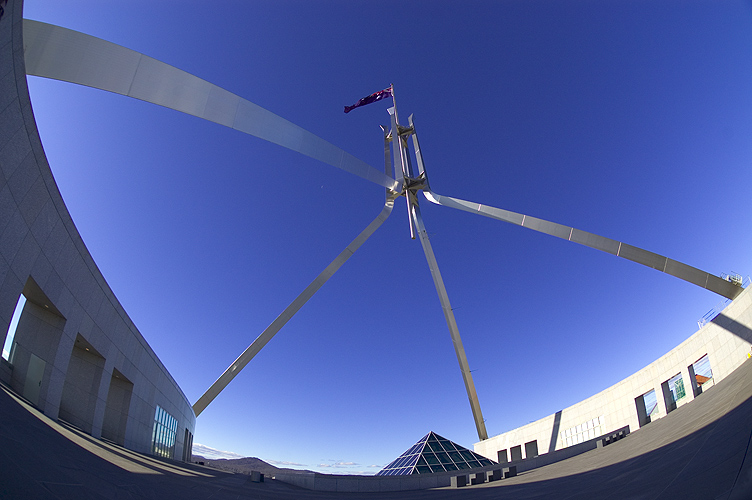 I'm back from my holiday and even though I've only been away a little over two weeks it feels as though I've been gone for a month or more! The number locations and new experiences has left it echoing in my mind like one of those dreams where the current environment segues constantly.

The first leg of the trip was spent in Canberra with friends who I've known through other friends and online for many years but never had the opportunity to meet in person. I flew to Sydney (see the previous post) and from there in the evening to Canberra where they met me at the airport. Staying at their place the first night and then in the CBD the following nights, I had the pleasure of their company for the duration of my time in Canberra as they were kind enough to drive me around and show me all of the sights!

Above is the massive 81 metre high flag spire of the Parliament House, as seen from the roof level.