some kind of turbulence... 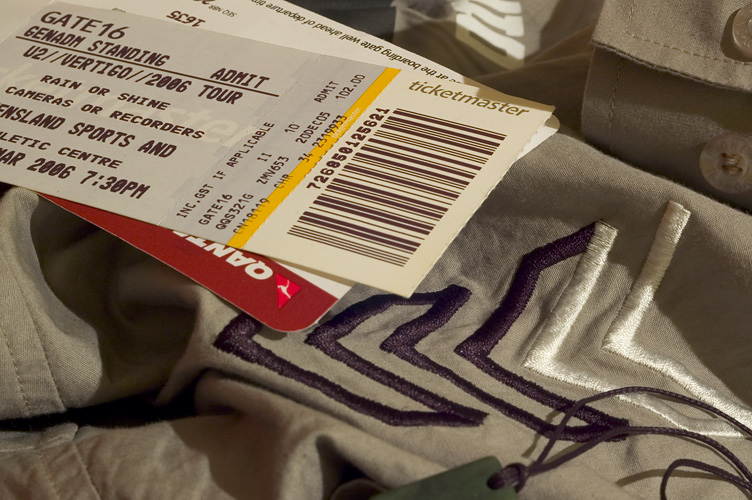 Early Tuesday morning and with only a few hours of sleep (my body clock is running on Helsinki time), I flew to Brisbane for the 8-month-postponed U2 concert. Just to add to the chaos, Tuesday was coincidentally the day of The Melbourne Cup.

The flights there and back were dislocated when the airline recently withdrew its services from this area. Sunshine Express is now a charter service only, so the existing reservations were taken over by Qantas. As you can imagine the transfer of reservations resulted in some "fun", with earlier flights and incorrect times and e-ticket numbers being issued. It's lucky that I double-checked the times provided via e-mail because otherwise I would have arrived at the airport to an empty gate.

Because the new flights were earlier than what had been originally booked there was time to kill after I arrived in Brisbane. There was ample time to get something to eat, walk around the city, do some shopping and then see the movie An Inconvenient Truth (which I'd highly recommend). In the evening my cousin, brother and I went out for dinner at a cool little Asian restaurant before attempting to make it to the city where shuttle services were running to ANZ Stadium, the venue for the concert. At this point there was panic, because we were informed the shuttles were going to stop at 7:30 PM. It was 7:14 PM, and we'd missed the train. A bit of frantic running and flailing and we made it on the last shuttle.

With literally 50 000 people trying to get into (and later, out of) the stadium, to say there were lines would be a gross understatement. It was worth it though! The concert really exceeded my expectations and U2 sound just as polished in the flesh as they do in the studio, something which can't be said for a lot of rock bands.

The other people we were supposed to be meeting were impossible to locate even once we were inside; there were just too many people and the mobile phone network gave up under the weight of an undoubtedly enormous number of simultaneous calls.

Afterwards it took about two hours to get out of the place and home. Someone could make good money selling tees stating "I Survived the U2 Concert Shuttle Buses" - you had to be there to be able to appreciate the insanity of it all :)

The next day I went back into the city just in time for a bank of huge thunderstorms to blitz the coast. After another jumble of flight reservations, being shuffled between service desks and having my scrambled reservation reissued, I was on my way back. Due to the huge storms the flight was entertaining: constant turbulence, beautiful views of lightning from above and in the clouds, some creative flying by the pilots and a generally anxious look chiselled into the face of the woman sitting next to me. A westerly diversion to avoid some of the storm cells increased the flight time, then after landing there was a major blackout with the city being plunged into darkness.

It was a long and enjoyable two days :)